The term ‘puggaree’ originates from the Hindi word, ‘Pagri,’ meaning a turban or thin scarf of muslin. Intended for insulation, the puggaree was a traditional Indian head-wrap, adapted by the British for headdress worn in hot, sunny regions.

During World War One a plain khaki cloth band was worn and this practice continued until compulsory training was suspended in 1929. Following the introduction of Voluntary Training in 1930, new puggarees were issued to the Commonwealth Military Force with different coloured folds denoting the wearers’ Arm or Service.

During World War Two, a flat type of band was issued. Troops who were on active service in the Middle East at the time introduced a folded puggaree as a distinguishing mark of active service. Later, the Army reverted to various types of plain bands, green dyed puggarees for example, for jungle warfare. However, the official puggaree at the conclusion of World War Two was still the flat band.

The current puggaree has seven pleats, one for each state and one for the Australian Territories. It is made from light khaki coloured cotton and is worn on the slouch hat with a unit colour patch sewn on the right side. While the majority of the Australian Army wear the light khaki coloured puggaree, there are slight variations for members of the 1st Battalion, the Royal Australian Regiment, and the Corps of Staff Cadets.

Royal Military College staff cadets wear a distinctive puggaree of olive drab colour. The puggaree has eight pleats, with seven representing each state and one for the Australian Territories. The eighth pleat signifies the graduation of the first international cadet through the Royal Military College, who in fact hailed from New Zealand. 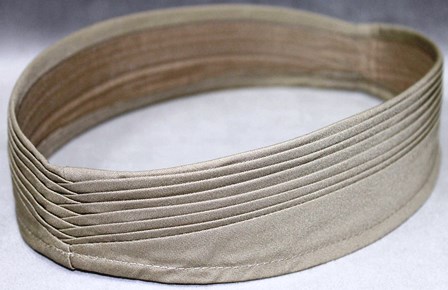