A catafalque is a raised structure supporting a stand that usually holds a coffin to allow mourners to file past and pay their last respects. A watch or catafalque party was traditionally mounted around the coffin to ensure the safety of the body while it lay in state.

Today, catafalque parties are mounted around coffins as a sign of respect and around memorials on occasions of remembrance such as Anzac Day.

The catafalque party consists of four members of an armed guard who stand, their heads bowed and their arms (weapon) reversed, facing outward approximately one metre from the coffin or catafalque as a symbolic form of respect for those who have fallen.

The origin of the tradition of resting on reversed arms is lost in time. It was used by a Commonwealth soldier at the execution of Charles I in 1649 (the soldier was duly punished for his symbolic gesture towards the King’s death) and it is recorded that at the funeral for Marlborough in 1722, the troops carried out a formal reverse arms drill which was especially invented for the service as a unique sign of respect to the great soldier. 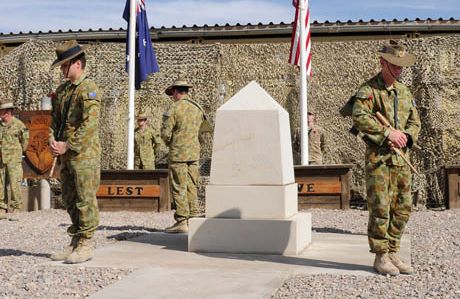