Why was Kokoda so important in WWII?  Why is Kokoda etched into the psyche of Australians, as is Gallipoli?

At Gallipoli a young AIF proved the Australian soldiers’ worth against enormous odds and hardships and made the emerging Commonwealth of Australia immensely proud. But the Gallipoli troops were not fighting to defend their homeland, as the 39th Battalion found themselves so in 1942.

Winning the Kokoda battle was essential to keep the homeland free from the oncoming Japanese forces and the 39th Battalion was afforded this task. Unlike the young, fit diggers of Gallipoli, the 39th were ‘a rum lot essentially a snapshot of the very young males left behind by the AIF – some so young they didn’t need razors, and the rest chosen from older generations including a few really old codgers who in turn had been just about taken from the retirement home. One young bloke was blind in one eye, the bugler only had one arm, another was an epileptic, yet another was a severe asthmatic while others were reasonably fit but their résumés wouldn’t get them a job anywhere else.’

The Kokoda Track was a path that traversed through 96 kilometres of dense jungle and steep mountains, which the 39th negotiated through knee high mud in some cases, carrying their supplies, weapons and ammunition with them.  Re-enforcement units later felled trees and laid them on the steep mountainsides to help the soldiers with their footing.

The fierce battles fought along the track included settlements of Isurava, Eora Creek, Templeton’s Crossing, Efogi, Mission Ridge and Ioribaiwa. During those gruelling days, Papuan men were employed as carriers and played a vital role in the battle. They carried supplies forward to the troops and ferried the increasing numbers of wounded and sick back to safety. The native Papuans had been badly treated by the Japanese and were fiercely loyal to the Australian troops, so much so they were affectionately nicknamed the 'Fuzzy Wuzzy Angels' and became an icon of the track.

By this stage in World War II, Australians felt stripped and defenceless. Our troops were fighting for England, the motherland, far from home. Against the express wishes of the British Prime Minister Winston Churchill, Prime Minister John Curtin turned some ships around and headed them back towards Australia to help defend us. In particular he brought home the battle hardened 10th Division to assist those already fighting in New Guinea.

The 39th were finally reinforced by the 2/14th and were relieved of duty, but instead of taking a rest they stayed to help their mates.  The 39th had fought for six long weeks and most resembled scarecrows, suffering from malnutrition and dysentery. There were not enough men from the original 39th left to re-form the battalion, but their spirits were unbroken, and after a month at Koitaki they returned to Port Moresby in mid October.

On 2 November 1942, a small Australian patrol led by Lt Alexander Black of the 2/31st Battalion, cautiously entered Kokoda. Expecting to encounter the Japanese, Black’s patrol found the village abandoned, the enemy having withdrawn to the Oivi Pass several days earlier. The Kokoda campaign had ended with a whimper, some three and half months after it had begun.

Jim Stillman, a Kokoda veteran was a member of the 39th Battalion and fought the Japanese in PNG. To read his story, please click here.

Part of the Kokoda Track was known as the Golden Stairs and tree trunks were used for footholes. 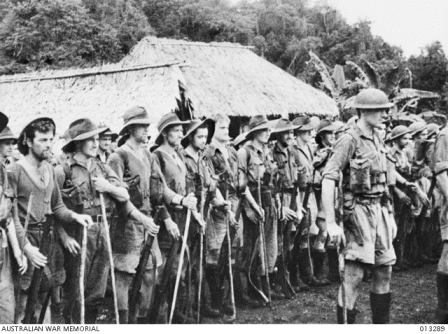 A Japanese prisoner captured near Nauro is cared for by Australian stretcher bearers. He had been overworked and was nearly starving when taken prisoner. (credit: Australian War Memorial).

Engineers building a bridge - one of the many that will be necessary along the track from Kokoda to Buna. (credit: Australian War Memorial).