Battle of Coral and Balmoral

Forty years ago, in May/June 1968 Australian soldiers fought their largest, most sustained and arguably most hazardous battles of the Vietnam War. Units of the 1st Australian Task Force (1ATF) confronted regimental-sized formations of the North Vietnamese regular army in fierce actions around Fire Support Patrol Bases (FSPB) Coral and Balmoral in what was then known as Bien Hoa province. The location of FSPBs Coral and Balmoral are marked by blue symbols on this satellite map.

The first of the battles occurred at FSPB Coral when massed enemy units attacked the base in the early hours of 13 May 1968. Australian units withstood heavy enemy attacks during which a mortar platoon and two gun positions were partly over-run. The Australians drove off the enemy after fierce close-quarter actions. The battle lasted over two hours. The task force suffered 11 killed in action and 28 wounded. In one mortar platoon five soldiers were killed and eight were wounded from a total strength of 18 men. One howitzer and two mortars were damaged. The enemy left 52 dead strewn throughout and around the fire support base.

A history of Australian artillery records that the attack on Coral was "the most sustained ground attack on an Australian field gun position since the Pacific war. Yet the gunners recovered their guns and were in action, supporting the infantry, the following morning."

Over the following four weeks, in further actions around FSPB Coral and Balmoral, Australian soldiers accounted for over 300 enemy soldiers killed. They also captured hundreds of enemy weapons. In return, 26 Australian soldiers died: two from 12 Field Regiment; one from 104 Signal Squadron; 16 from 1 RAR; 6 from 3 RAR and one from 161 Independent Reconnaissance Squadron. Over 100 Australians were wounded. Australian Army regiments involved in the series of battles were later awarded one of the five battle honours approved for the Vietnam War. 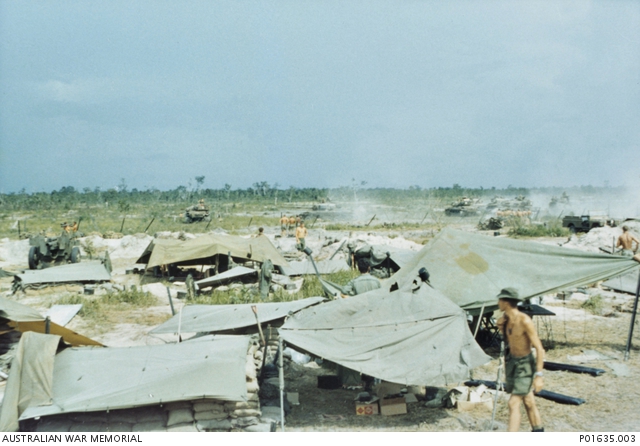 A view of Fire Support Base Coral, looking towards the East, at the time of the Battle of Coral. In the foreground are the hoochies or temporary shelters of 102 Field Battery, Royal Australian Artillery. On the far left is the Battery's No. 4 gun, a 105mm M2a2 Howitzer, in the background, the Centurion MKV/1 tanks of C Squadron, 1st Armoured Regiment, which have just arrived from Nui Dat, are moving into defensive position.

An M113A1 Fitters Vehicle (left) and an M543 5 ton wrecker (right) both with 106 Field Workshops, Royal Australian Electrical and Mechanical Engineers. The Wrecker, named TUNZA-GUTS was used at Fire Support Bases (FSB) Coral and Balmoral and it was the only heavy lift vehicle available to take pallets of ammunition from the landing zones directly to the gun pits and tank positions around the FSB during the May and June battles in 1968.

Battle of Coral and Balmoral exhibit at the Museum